Coins of Egypt™ is a NetEnt release, dating back from March, 2018, that deals with the well-known Egyptian theme. Nevertheless, in the innovative spirit of the software provider company, this slot has a wholly different approach to it, employing animations where others use cartoon-like symbols, as well as sound effects to emphasize the mystery veiling this civilization.

Coins of Egypt™ slot game features its symbols across a 5×3 reel grid which is set against equally gloomy and mysterious backdrop of the cloudy sky, with palm trees and two animal-like deities on either side. It is the symbols which emphasize the Egyptian theme the most, starting from the low-value bug-like creatures with various precious stones on them, indicating the card symbols. Further on, higher paying symbols feature a scorpion symbol and 4 Egyptian Gods – Anubis, Isis, Bastet and Wadjet.

As for the Wild and the Scatter symbols bearing the highest potential for payouts, the former is indicated by a golden scarab while the latter is represented by a white pearl with golden bracelets orbiting all around it. The Wild performs its standard function of replacing all regular symbols, and at the same time boosts payout when part of a winning combination on a payline. Ultimately, there is no mention of Egypt without its mummies, which brings players to the Collect symbol – a pharaoh’s mummy – exclusively seen on reel 5 for the purpose of one of the two bonus features illustrated below.

While regular symbols landing on the slot’s paylines bring in their fair share of winnings, it is the special features which give each game its main payout potential. On the one hand, the Coins of Egypt™ video slot by NetEnt has a base game feature – the Pharaoh Coins. Here, a minimum of one to a maximum of three coins with a payout of 2x to 15x the bet amount can land on reels 1, 2 or 3. When the Collect mummy symbol appears, all coins are collected and their payout is included in that spin’s winnings.

On the other hand, the Free Spins feature is triggered by three Scatters landing on reels 1, 3 and 5 each, during a single base game spin. This prompts the appearance of the three chests – the Ruby Eagle, the Emerald Snake and the Golden Cat chest related to the coins landing on the 1 reel (with 2x-4x payout), 2 (2x-5x) and 3 reel (4x-10x), respectively. These chests serve to collect their specific coins, with max 3 coins (1 per reel) per spin. Each chest is also related to their specific seal symbol on the reels – eagle, snake or cat – that land solely on reel 5. One seal symbol can land per spin, and three identical ones need to be collected in order to stop the Free Spins round, and have the chest wins credited to the general player winnings.

With a bet size range of €0.20 to €200, players can choose the entry fee to some of the pyramid’s greatest riches and treasure chests.

Base Game Preview of Coins of Egypt™ Slot 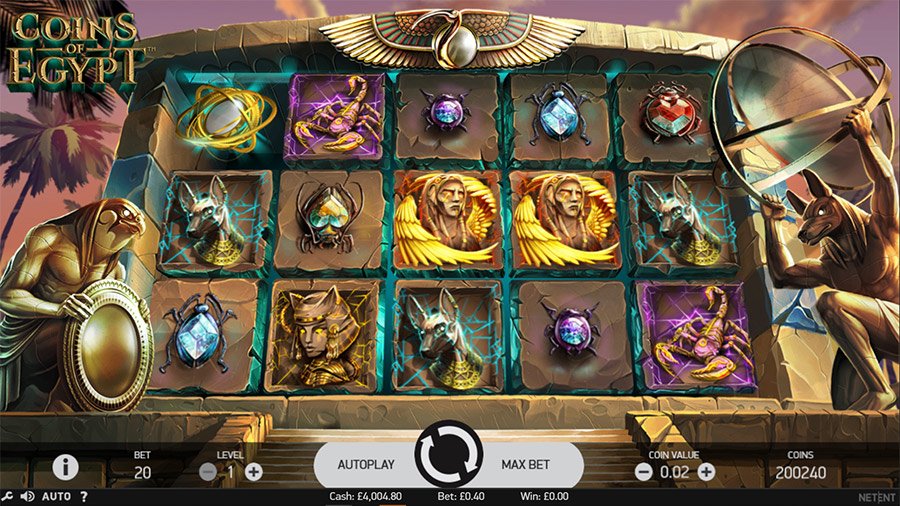