Another fantastic comeback for Microgaming to celebrate the 15th anniversary from the first online casino slot Lara Croft – Tomb Raider™, which was launched back in 2004. Tomb Raider Secret of the sword™ released in 2008, was the 2nd video slot developed on the popular character Lara Croft and her adventures in search of older relics. With the release of the latest movie Lara Croft movie, Microgaming in collaboration with Triple Edge Studio and Crystal Dynamics took the opportunity to continue the joined venture with the Japanese game developer, Square Enix to launch the 3rd version and complete the trilogy of the adventurous Lara Croft Temples and Tombs™ video slot. Square Enix are well known for having developed one of the most popular and highly advanced video game Final Fantasy which was available on several game consoles.

Lara Croft Temples and Tombs™ is a 5 reel, 3 row with 243 ways to win video slot, that includes 3 jackpots; Grand, Major and Minor. There’s also several video slot game features, including Free Spins, Multipliers, Wild Symbols and the Rolling Reel™ feature which is very similar to Jungle Jim video slot and the Avalanche Feature of Netent, the mechanism that was firstly used on Gonzo’s Quest video slot. With the Rolling Reel™ feature, any winning combination will be replaced by new falling symbols, which rolls on the reels. If more winning combinations are achieved during the same spin, eventual winnings will be multiplied by x2 up to a maximum of x5 multiplier. Lara Croft’s Ledger Book is the Free Spin symbol. 3 Free Spins symbols will award the player 8 Free Rounds which can be re-triggered during the free spins rounds. Winnings during Free Spins rounds will be multiplied by x3, x6 on the 1st roll, x9 on the second rolls and x15 on 3+ roll (Roll = winning combination), which means that there is a very high chance to get a great win! The Wild Substitutions in Lara Croft Temples and Tombs™ video slot have 2 different purpuses; Substitutes symbols to generate a winning combination and Jackpot coin collection. The more coins a player collects the higher is the chance to trigger one the random jackpots. The jackpot values changing according to the bet amount.

Lara Croft Temples and Tombs™ video slot was released by Microgaming in collaboration with Triple Edge on the 8th of May 2019! The return to player also know as RTP is set to 96.05% and it is considered as a high volatility video slot. All in all this is one of my favourite vide slot released by Microgaming in 2019. Feel free to share your thoughts about this video slot by simply register an account and submit your comments.

Recommended: 20 Bonus Spin on Book of Dead at Dunder Casino! 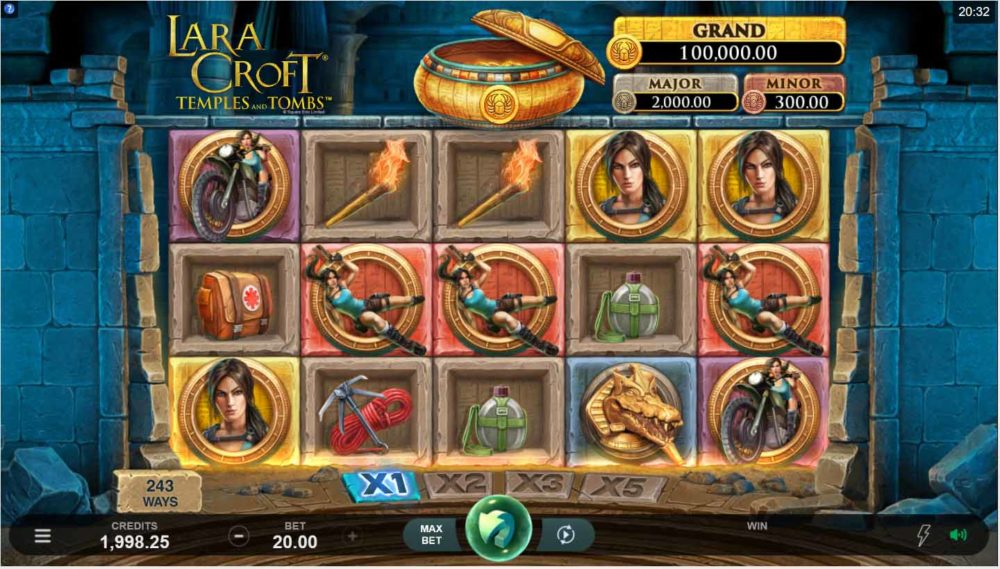