One lucky player from New Zealand managd to win the jackpot on Treasure Nile video slot, powered by Microgaming. On the 25th of March 2019, Rochelle C from New Zealand was playing this progressive jackpot video slot at Jonny Jackpot Casino which has recently opened in December 2018. While spinning the reels of Treasure Nile, 5 Pharaoh symbols triggered the progressive jackpot that had reached $40,000. Let’s say, this amount won’t allow you to retire earlier, but it would definitely boost the income of any household! It is fair to say that Treasure Nile Jackpot is won on a regular bases, as it is triggered when it reaches $£€40,000 to $£€60,000. . As a matter of fact, on average, this progressive jackpot is won every 3 days. Note that this is an average taken from previous wins. This doesn’t mean that the jackpot cannot be won when it reaches a higher amount. There is no guarantee that you will trigger the jackpot when it surpasses £$€60K or more..

Treasure Nile’s jackpot is surely triggered more often than the one of Mega Moolah, as it is more volatile and it triggers more often than many other jackpots around. Treasure Nile video slot was launched in 2004, and till this day it still remains one of the most popular progressive video slot available online. We have to give this to Microgaming, that although some of the game are closing in their 20th anniversary, loyal players still chooses these games over many others that have probably better design since they’re more modern. 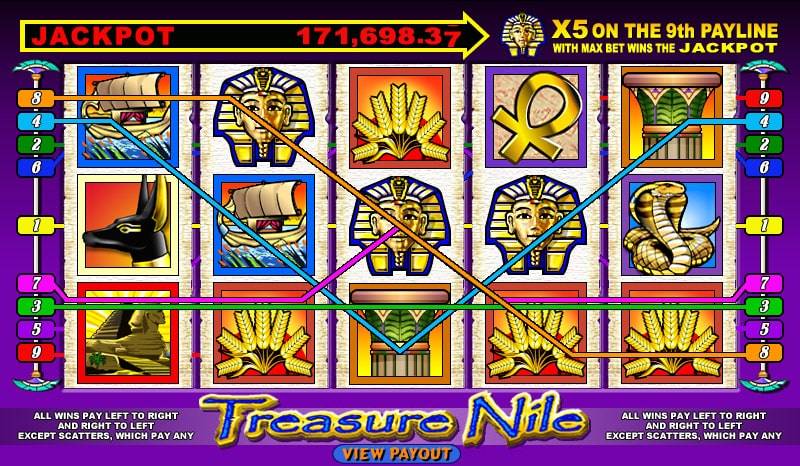