Are you ready for another norske mythology video slot? Thor’s Vengeance video slot is the latest norse mythology themed game powered by Red Tiger Gaming. The game design of this video slot is top notch and so are the game features. The main character is indeed mighty Thor, wielding his hammer. Expect this strong god to cast some  lightning. randomly throughout the game, which will transform low paying symbol into the same symbol. This is definitely a slot that will capture a wide audience out there, especially those who like to play Gonzo’s Quest and the famous Avalanche reels.

The playing grid of Thor’s Vengeance slot is set to 6 reels , with a formation set to 4x4x3x3x4x4 rows, with 2,304 ways to win. This video slot uses the cascading mechanism, and removes the symbols of any win combination to make space for other symbols to fall. There are plenty of game features within this game, including Free Spin rounds, Bonus feature, symbol replacements and wilds. Players can choose to bet from 10c up to €10 per spin, which is pretty low when compared to other video slot. The maximum possible win is set to 5,249 x the bet amount, which is fairly high.

It is good to start with Thor’s Lightning Strike feature which can randomly activate at any given spin. When this mighty god strikes his majestic lightning, various high paying symbols may fall on the reels, multiplier symbols or some symbols may be swapped.  Thor’s Hammer feature can also activate randomly throughout the spins. When Thor strikes his hammer, the reels will nudge until a winning combination is formed. Thor has other surprises under his sleeve! Yes, a 2×2 symbol can randomly dorp when he strikes his might hammer.

The free spins has in store plenty of game feature, which are available during main game, and of coarse a few extras. The highlight of the free spins is definitely the win multiplier that can increase up to 20 times.

Red Tiger Gaming has delivered a great video slot that can be appreciated by various online slot players out there. Nordic mythology themed video slots have become very popular, and we have seen various other slots, including the Viking’s trilogy by Yggdrasil Gaming or Vikings™ based on the TV series and powered by Netent. The theoretical payout percentage is set  to 95.66% which is slightly disappointing. Howerever, Thor’s Vengeance has various features that are very popular with online slots players, especially the cascading reels and the amount of free spin rounds that can be triggered, which makes up for the lower than average RTP. Overall it has great potential to become one of the favourite slots out there.

You Must Be 18+ To Play Thor's Vengeance slot For Fun! 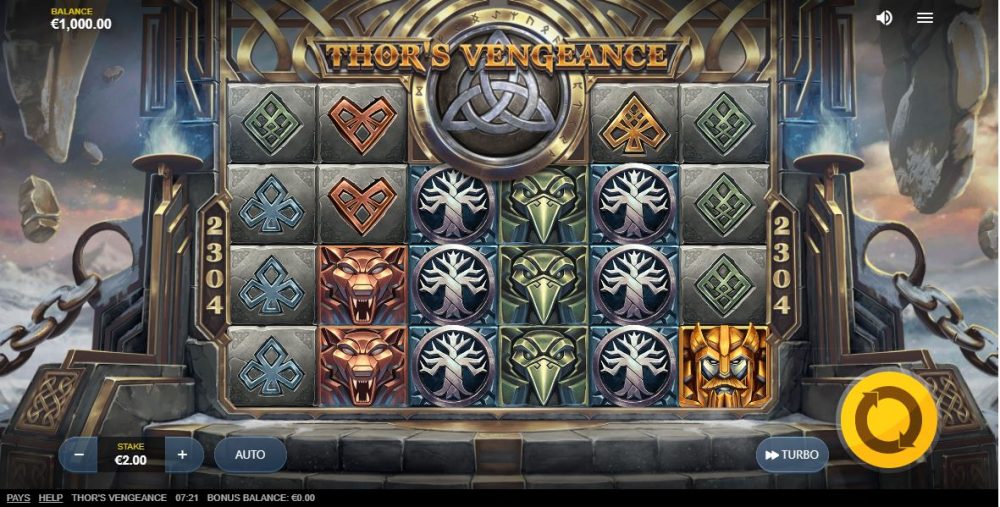