Netent announced the release of another branded video slot, this time the theme is based on Conan the Barbarian. This character has been around since the 1930’s, when the American author Robert Ervin Howard  published this fantasy novel on this famous warrior. Since then we have seen a couple of movies that made quite a hit in 1982 with Arnold Schwarzenegger as the lead character, which was such a great success that a sequel was released in 1984. In recent years we have seen a remake of the popular movie which was released in 2011. We hope that Conan™ video slot will make the same impact with Netent slot lovers. Netent announced this video slot in February 2019, and since, have been working in developing this stunning video slot and it’s game features. We are expecting a good impact, considering the time that they’ve taken to release this game.

Conan™ is a 6 reels, 4 rows and 48 fixed paying lines video slot, same layout as Gem Rock video slot powered by Yggdrasil. The theoretical payout percentage (RTP) is set to 96.28%, which is average when compared to other Netent slots. Players can choose to bet from as little as 0.20 up to a maximum bet of €200 or equivalent. The highest possible win on Conan™ video slot is set to 1,008 times the stake amount, so if you are playing at a maximum bet you can win up to €201,600 per spin.

Players will find great slot features, including; Mystery Symbols, Tower Wilds, Battle Wilds and 3 different Free Spins rounds. If a Tower Wild Symbol lands on the 1st and 2nd reel it will expand either partially or in full to cover the whole reel. The Mystery Symbol can appear on the 3rd or 4th reel and will change to form the best possible winning combination. In addition Conan will fight against the snake, and everytime he wins the battle a multiplier will be awarded to the player. The multiplier will start from 3x up to 7x, which can award the player a substantial win. When Battle Wilds appear on the 5th or 6th reel. the symbol will expand up to 3 positions sideways. If you manage to land one of each Wild Symbol, the Thoth Amon Feature will activate and 3 to 6 Mystery Symbols will be randomly placed on the reels.

The Scatter Symbols will award Free Spin rounds and the amount varies depending on how many scatter symbols land on the reels:

The player will have 3 options of free rounds to choose from:

Conan™ video slot will keep you entertained for quite some time as the game features are quite lengthy when they are triggered. The payout percentage is quite average, but players can still generate a substantial win. We look forward to hear more about this video slot from our visitors. Conan™ was released by Netent on the 24th of September 2019. Let us know your thoughts by Login or Sign up and submit your comments. 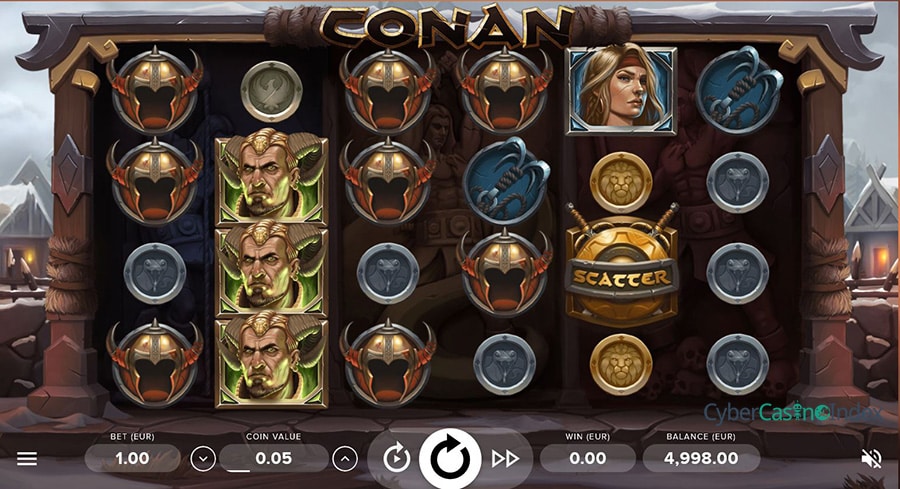