Easter is already around the corner, and Yggdrasil Gaming did not miss on it. Prepare yourself for an adventure on Easter Island. Go on adventure on this fantastic Island on the west coast of Chile in the middle of the vast Pacific ocean and get a better insight on the gigantic Moai statues! There will be 2 Moai statues in this Easter Island video slot, which will guide the explorers through their journey to discover that with every win, a re-spin is triggered, with the winning symbol replacing either all high or low pay symbols. Hit a wining line with either 4 or 5 symbols and your reels will grow up to 4 rows taller! There is also sticky wilds that may appear on reels 2 and 4 which expands to cover the whole reel. So get ready and set to explore the mysteries that beholds Easter Island! 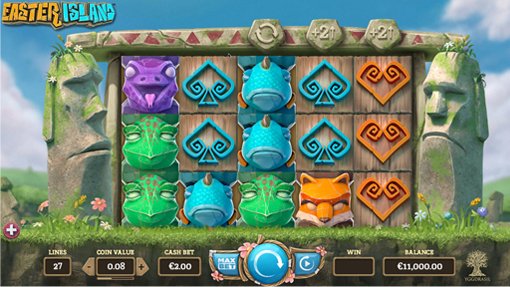