Quickspin releases Golden Glyph video slot with cluster form as paying combination. This is the very first cluster slot that Quickspin has created, and if you are into these type of slot games you will surely enjoy this one.

The theme of Golden Glyph is set on in Ancient Egypt, which is very popular among casino players in general. Many of us are fascinated and intrigued by the mysteries of this advanced civilisation. In the background one can the the majestic pyramids and the great Nile river. The quality of the design is top notch, which doesn’t comes to a surprise since the developer of the game is Quickspin.

This video slot unique 7×7 grid with clusters is packed with game features and constant action. 5 or more clusters will form a winning combination and the highest paying symbols are of course Tutankhamun, Cleopatra, and Horus. The winning combination is removed and more symbols falls in to replace them, which continues until there are no cluster wins on the reels.

The game features of Golden Glyph video slot, are the powers wilds, cluster payout and 4 different power up modifiers. On the left ride of the grid, one can see the reel of  the power ups that changes randomly with  every spin.

If you like the arcade looking type video slots, you should definitely try Golden Glyph video slot. We have seen many casino games of this type, especially from Play’n Go and some from Netent including Archangel Salvation, Gemix, Reactoonz and many more. Seems this concept is quite appealing for some casino players. I was a bit disappointed to see the low theoretical payout percentage which is set to 96.19% (RTP). The maximum possible win on Golden Glyph video slot is set to 13,000 times the bet amount which is above average.

Golden Glyph video slot was released on the 12th of November 2019. I think that this casino game is well crafted and has good potential and we look forward to hear your opinion and comments. Sign up or Login and let us know what you think about this latest Quickspin video slot! 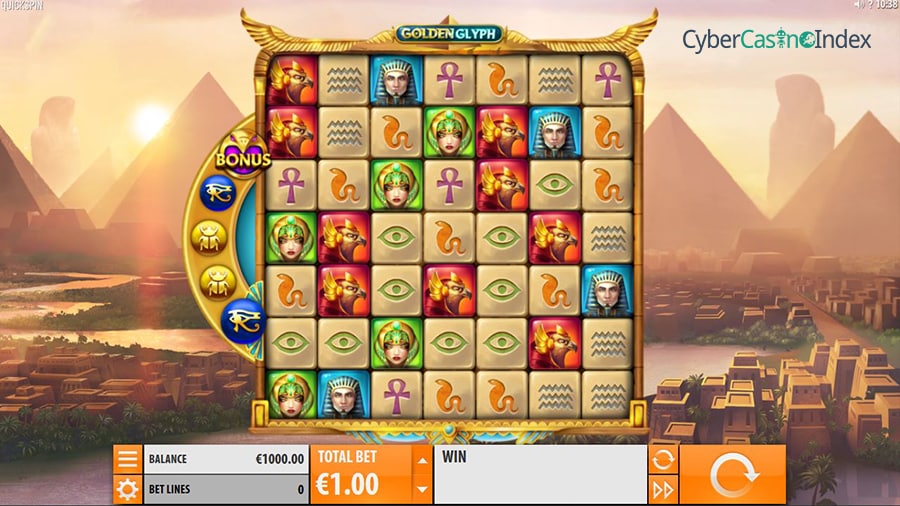