Ice and Fire video slot comes with two different 5 x 5 grid, which is split with an Icy theme with glaciers and mountain peaks on the left and a hot theme with lava and volcanoes on the right. Each grid is ruled by a respective Queen and with special symbols which can trigger different game features.

As said their are 2 5×5 grid and in each there is 60 possible ways to win which means 120 ways to win on each spin. The symbols falls in a cascading style. This means that if a winning line is formed, the  symbols from the winning combination are removed and more symbols fall down to replace them, and continues until no further winning combination is formed on either side. If you have played Gonzo’s Quest before, you will notice that the mechanism is pretty similar. The minimum bet starts from 0.40 up to a maximum of £€$400 per spin.

Beside the cascade mechanism, which is highly appreciated by online slot players, there is also the Wild Symbol Cloning feature. When wild symbols lands on any side of the grid, the wild symbols will be copied on the other grid in the same exact position. This means that you will get a double chance to win on either the Ice or the Fire grid. Wilds will be cloned even during the cascading spins.

Yggdrasil Gaming seems to be choosing very good studios to work with and is releasing good quality slots through their YGS Masters platform. The design and the game play of Ice and Fire video slot are of high quality and will certainly entertain a wide audience. The reel mechanism and the game features will make you want to spin the reels to uncover more. The theoretical return to player percentage (RTP) is set to 96.64%, which is also higher than the average Yggdrasil Gaming slot. Send us your feedback on this video slot by simply login or sign up an account with us!

You Must Be 18+ To Play Ice and Fire Slot For Fun! 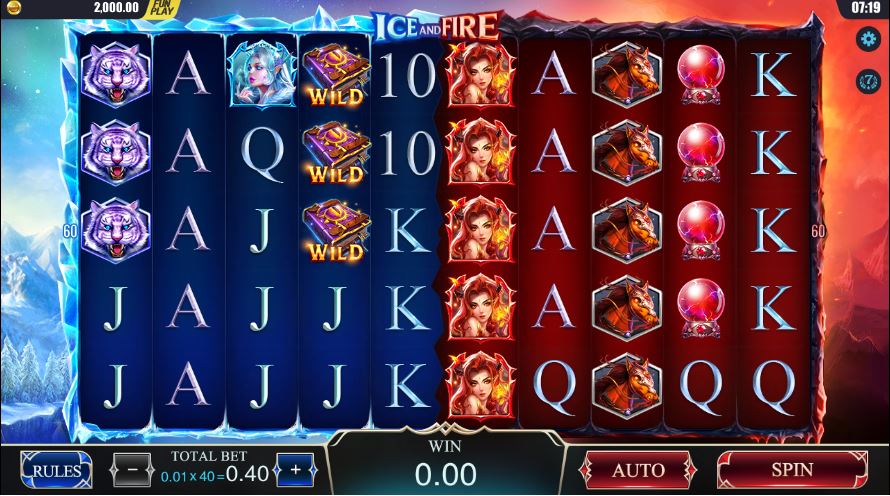