Ivan and the Immortal King video slot is based on the Russian tale who is depicted as main hero named Ivan Tsarevich who is in battle with Kind Koschei who is believed to be immortal. In many of these tales Ivan is depicted as the main protagonist that goes against all odds to defeat this evil King. According to folklore, Koschei’s great inhumane force is hidden in a needle, within an egg, within a duck, within in a hare, within a chest. Your quest will be to unlock the chest, and break the needle, and only then can Ivan can defeat Koschei and seize all his treasures.

Ivan and the Immortal King is a 5 reel, 3 lines and 20 fixed paying lines video slot. The theoretical return to player percentage is set to 96.29% that is set as follows base game 51%, free spins 42%, base game feature 3%. Players can win up to 10,222 times their riginal stake! The bet variation starts from as little as €0.20 to a maximum of €100 per spin. There are several features that can be triggered while spinning the reels. It is believed that the Baba Yaga is an unfathomable witch that likes to show up when you’re short of scatter symbols. If Baba Yaga is in a good mood, she will help you progress on your way towards achieving more wins. When she appears, she will hide 4 random adjacent symbols, which then are replaced in one of two ways:

Ivan and the Immortal video slot was released by Quick spin on the 11th of December 2018.

Payout information on Ivan and the Immortal King Slot

Game Features of Ivan and the Immortal King Slot

Base Game Preview of Ivan and the Immortal King Slot 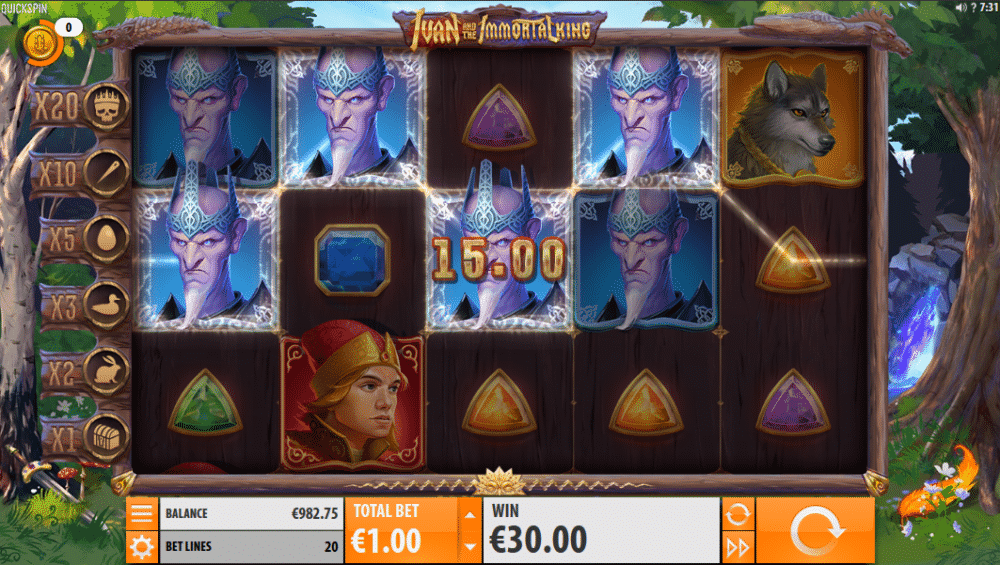 Footage of Ivan and the Immortal King Slot