Yggdrasil Gaming releases another fantastic video slot Lilith’s Inferno, which is a 5 reel, 4 row with 25 fixed betting lines video slot. This video slot was developed by Avatar UX Studio and released through YGS Masters. We have seen more than one game release per month from Yggdrasil Gaming, and I must say, the quality of their games remains consistent. The theme of this video slot is set in the underworld, so expect some creepy characters on the symbols. Having said that, the ambience itself during main game is quite relaxing, while the bonus game feels like it’s set at the core of the planet, with lava fuming from everywhere. In ancient mythology, Lilith was regarded as a goddess darkest deities while other more modern cultures is described as a demon and Adam’s first wife.

Enough with folklore and mythologies now and back to the game. As always, Yggdrasil Gaming slots are packed with games features, including; Free Spin rounds, Wild Substitution and a Bonus Round. So expect some action on the reels and nevertheless a boss fight during the free spin rounds!

During the free spin rounds, players can trigger the bonus game by simply landing 2 VS-Symbols. The Bonus Round will take place in Lilith’s Inferno (hell), where the main character, Lilith fights against the evil creature. You will see a life bar on top of Lilith and the boss. If the boss if defeated, all the symbol representing him will turn into wild symbol for the rest of the free spin wounds, plus 2 extra free rounds will be added to the players.

Lilith’s Inferno video slot has a lot to offer, and I am sure it will become one of the favourite video slot among some players. The theoretical payout percentage set on Lilith’s Inferno slot is 96.40% (RTP). Players can choose to bet from as little as 0.10 up to a maximum of £$€150 or equivalent. The highest possible payout combination in this slot is set to 3,968 times the bet amount. This video slot was released on the 10th of October 2019! Send us your feedback on this video slot by simply Login or Sign up an account with us! 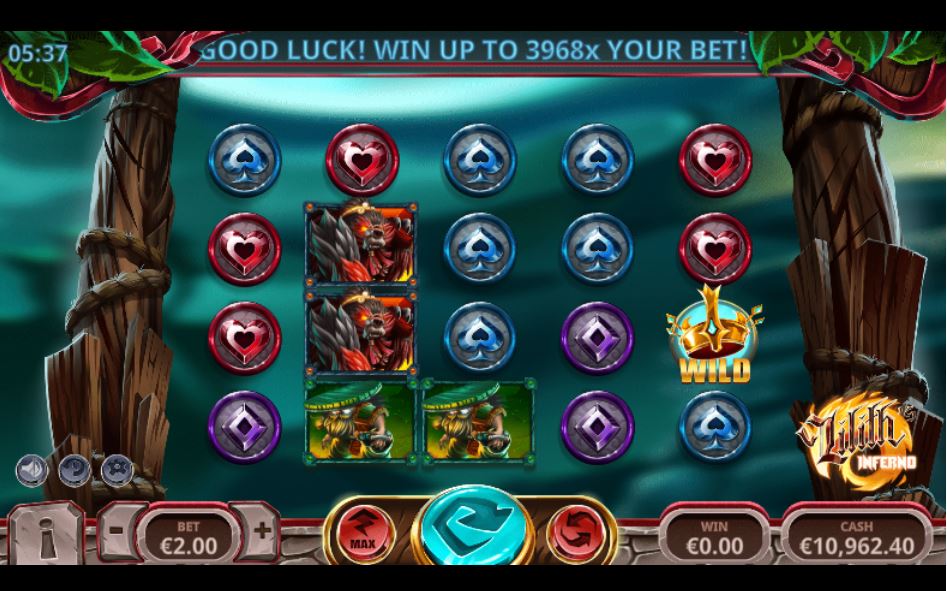 4.0/5
15 Free Spins on Starburst
This review was written by Marie Smith
This is Marie here! A slot and casino games enthusiast. I've played and reviewed various online casino games to offer our visitors the best insights on the most popular games - www.cybercasinoindex.com