NetEnt has a way of announcing their new releases in a way to keep players on their toes, guessing what features are likely to be offered. In line with this, the software providing giant has made quite a promotion out of their slot release, the Narcos™ online slot game. Narcos™ is a 5 reel, 3 row with 243 ways to win. The theoretical percentage also known as RTP is set to 96.23%, with a possible maximum coinciding win of €602,400!

As the name suggests, this game is inspired by the popular TV show available on Netflix, following the life and work of drug and mafia boss Pablo Escobar. Inspired by the true story of 80s Columbian landscape, the theme of both the show and the subsequent slot are bound to feature sound effects, graphics and design elements reflecting the constant fights, crimes and evil of the time.

NetEnt has announced the slot release to the press after they signed the contract with Gaumont, the film company behind the TV show and this was back in 2018. Once developers were given legal rights to use the show for inspiration, key elements and characters of the story line were identified and will be incorporated within the game play. While enthusiastic NetEnt slot players and Narcos™ fans alike are impatiently waiting on the official release date which was finally confirmed that it will be deployed on the 23rd of May 2019.

Still, considering that the slot is based on the respective TV show, most predictions end up with the main characters featured as the reel symbols, and Escobar’s face as the highest-paying one. Taking into account that it’s the work of industry leader NetEnt, there are bound to be extra unique features contributing to a smooth and rewarding game play. Some of the game features that we are currently aware of are, Free Spins, Walking Wilds, Drive-by, and a Locked Up feature with a Golden Locked Up symbol. During the free spin rounds the wild symbol transformation and the walking wilds will trigger. Walking wilds are also available in the astonishing game Halloween Jack™. When a walking wild lands on the reels additional spins with potential wins are given to the player until the walking wild symbol makes all the steps on the reels.

Narcos™ video slot was released by Netent on the 23rd of May 2019, and we are quite sure that this video slot will become one of the most popular Netent branded games considering the fact that the TV show has made quite an impact among its spectators! .

Recommended: 10 Bonus Spins to play on Book of Dead at Casilando!

Base Game Preview of Narcos™ Slot 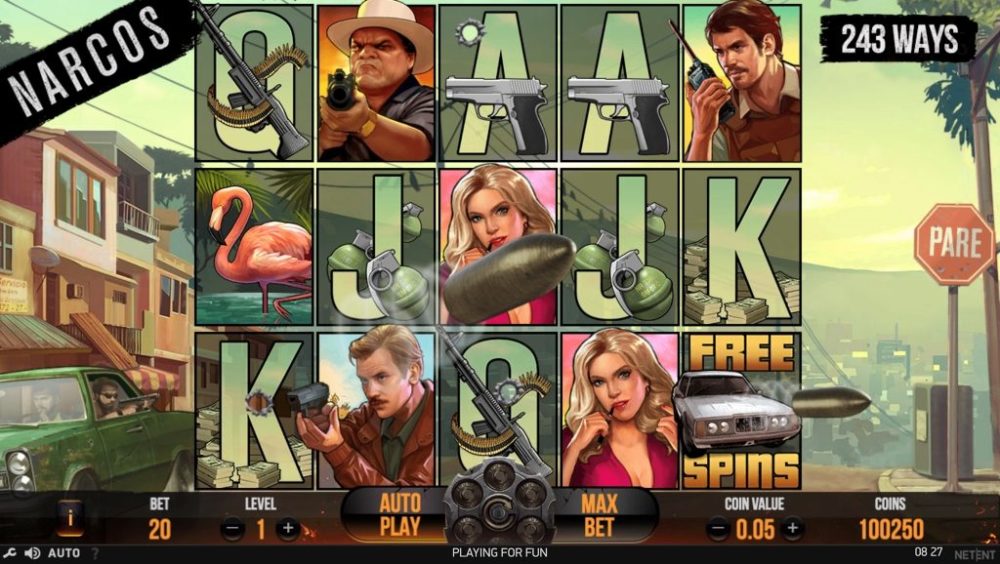