NetEnt releases the first Slot of the year Glow™ on the 14th of January 2016. This Video Slot was first released exclusively for certain brands, now you can find it on all the casinos that offers NetEnt games!

Glow™ is a captivating game that takes the players on a journey to the mystical northern lights and glowing animal spirits. The fun starts with 5 reels and 15 fixed betting lines and players can get into the excitement of seeing Wild substitutions with  x2 multiplying their wins!

Glow™ has 15 fixed betting lines with Wild substitution and Free Spin features that can trigger a maximum win of €80,000 on a single spin! This new game is quite similar to Sparks™, which was released in July 2015.

Sponsored: Get 21 No Deposit Free Spins on Book of Dead! 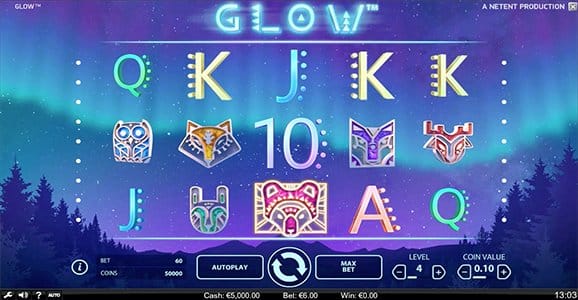 Click Here To View All The Casinos That Offers Netent games.