NetEnt has established its leading position in the online casino software provider industry, and further confirms its role through its successful marketing strategies and high quality releases. The Wild Bazaar™ online slot perfectly fits the description, as any enthusiastic player is bound to find out soon enough.

The Wild Bazaar™ online slot game release from NetEnt has been the target of a great publicity build-up, as usual. What is more, it has managed to meet player expectations, as anyone will notice from the first spin on the shelf-like reel grid. Starting with first impressions, the slot’s visual design features are excellent, as it is expected of any product from NetEnt’s developer labs. Set against an Arabic-like city backdrop and clear blue skies, it reminds of Disney’s designs, but despite the cartoon style, a cool breeze, loud radio and a blowing fan in the lower left corner to keep players alert of their surroundings. Nevertheless, it is the elements in the forefront that make up the slot’s gameplay. Namely, the oriental market-like shelves feature a 5×4 reel grid, decorated with 26 paylines and both low and high-value symbols. The former consist of a Blue Earring, Green Ring and Red Brooch, while the latter are represented by 4 chests differing in colour – Blue, Green, Pink and Red.

The grid layout makes it evident that the Wild Bazaar™ slot lacks a Scatter, the symbol which typically triggers a bonus round with separate gameplay. Other than it, this NetEnt slot release is further recognizable by its Max Bet functionality – the feature requires a double click to trigger when playing with lower bet amounts. Anyway, the four impressionable chests act as four Wilds, each triggering their own set of features and acting as a Wild symbol – replacing all regular symbols during their corresponding spins.

Before getting to the specifics of the Wild feature, players should know that the slot pays from left to right for a minimum of three identical symbols landing on an active payline. Hence, this medium variance slot with a 96.15% RTP and a maximum win estimated at about 390x your bet amount, it is a rather attractive destination. The slot should suit amateurs and high rollers alike, as its bet size ranges from €0.20 up to €400, leaving room for quite handsome payouts. The four chests correspond to the four Wilds on the slot’s grid, each triggering its own player benefit with a minimum of three on an active payline:

While these may not seem like overly exciting features on their own, learning that players can trigger all four of them and thus fill the entire reel grid with Wilds is certainly something to look forward to.

All in all, some players may still lack the common Scatter symbol, but with the Wild Spins and their rewarding features, players are still likely to land enough rewards to find it meet NetEnt’s standard entertaining, immersive and rewarding qualities. 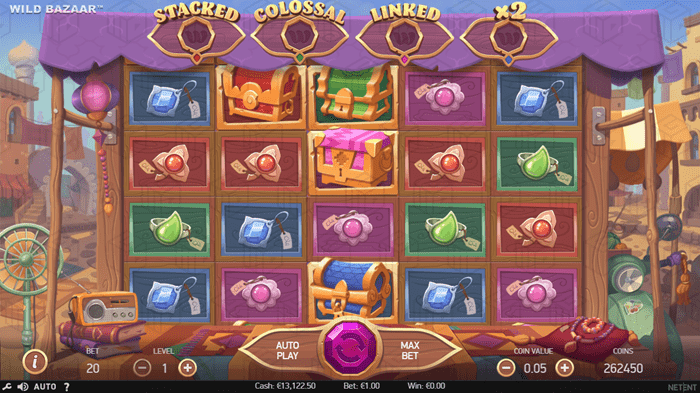