It seems that smaller games development studios are teaming up with YGS Masters, a games aggregator platform powered by Yggdrasil Gaming. The producers behind 9K Yeti video slot are 4ThePlayer which are quite new, and to be fair I had to do some research on them. We are sure that Yggdrasil Gaming saw potential in this studio since they decided to partner up with them. So far, Yggdrasil Gaming has always developed high quality games, both design and game features, so we expect nothing less from their partners.

9k Yeti video slot has a particular playing grid with 6 reels, 4 rows and 4,096 ways to win. The theme of the game is based on the infamous Yeti, which is regarded as the Bigfoot of the Himalayas. The setting takes place on the highest peaks of the Everest mountain, I would say it’s the perfect ambience for the Christmas season and winter in general.

If you are looking for a high volatility slot with an RTP higher than the average Yggdrasil Gaming slots, you have landed on the right game. The theoretical return to player percentage is set to 97.00%. The variance and volatility of this video slot are set to high, so we expect good winnings and happy players! Players can win up to 9,000 times their stake amount on a single spin. Overall, I think that the mechanics of this game are quite fair and can give a good experience to the player.

Usually, Yggdrasil Gaming video slots comes with several game features, but it seems that the Snowstorm Free Spin Rounds are the hero of this game. When the Yet or Wild symbols lands on the reels with no win, the snowstorm features will turn any loosing spin into a guaranteed win! This prevents the players having endless dead spins, making it much more exciting! The Free Spin Rounds are triggered when 3 or more scatter symbols land on the reels. Players will get the chance to win up to 88 free spin rounds with the chance to retrigger up to 880 free spin rounds. Check below the amount of free spins that can be granted:

9k Yeti video slot was released by 4ThePlayer through Yggdrasil Gaming or YGS Masters platform on the 14th of November 2019. We expect online slot players that like the multi paying lines video slots, to appreciate spinning the reels of this game. Overall, there isn’t many game features to uncover, but the RTP and the volatility of the game makes it interesting for gamblers to take their chances. Register an Account or Login to your Account to send us your feedback on these slots! 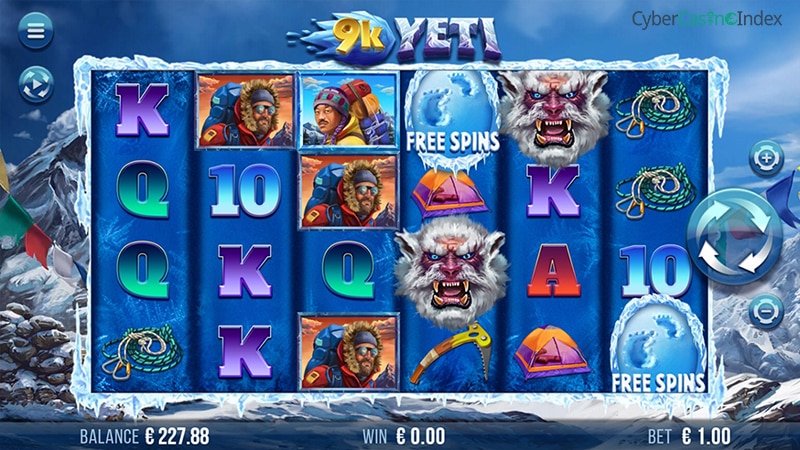