Finn is back, and is taking us for a visit in his tavern. Netent releases the sequel of Finn and the Swirly Spin™ one of the most popular video slot in their games catalogue. Finn’s Golden Tavern™ video slot at a first glance looks very similar to the previous slot, and uses the same Avalanche™ reel type, which was first released on Gonzo’s Quest video slot. This cute leprechaun will take us in his tavern this time, so expect some beer and whiskey bottles as symbols.

Finn’s Golden Tavern™ video slot is a 5 x 5 reel layout and winning combinations are formed by Cluster Pays! This type of video slot is becoming more popular among slot players these days and we are seeing many new video slots with this type of reel setup. We have noticed some similar game features, including the Spiral Spin mechanism. Instead spinning reels or falling symbol, both Finn and the Swirly Spin™ and Finn’s Golden Tavern™ symbols move in a spiral mode. Do not get confused, in reality it’s just the optical movement that is different, the cluster winning combination is the same as on other slots! Other game features available are the Free Spin Rounds, Random Coin win, First Slam Feature and Multiplier wins.

Free Spin rounds can be triggered when the chest symbol reaches the centre while in the previous one it was the key, so in reality the concept is the same. When the chest reaches the central position, 5 Free Spin rounds are awarded to the player! During the free spins rounds the win multiplier is activated and will go up x1, with every 5 steps. The Random Coin feature will change low paying symbols into coins. Last but not least, Finn might grant a win on a losing round when he slams his fist. Yes the Fist Slam Feature can randomly generate a win when no winning combination is formed.

Finn’s Golden Tavern™ video slot has theoretical payout percentage set to 96.10% which is lower than the original as well as below average than other Netent slots. We were expecting a little bit more from this video slot, especially after the success the original one had. The maximum coinciding win is set between  1,000 – 2,000x. Note that we have to verify this when we get the actual facts from Netent. Finn’s Golden Tavern™ video slot was released by Netent on the 4th of December 2019! Login or Register an account and let us know what you think about this latest Netent video slot.

Preview of the base game of Finn’s Golden Tavern™ 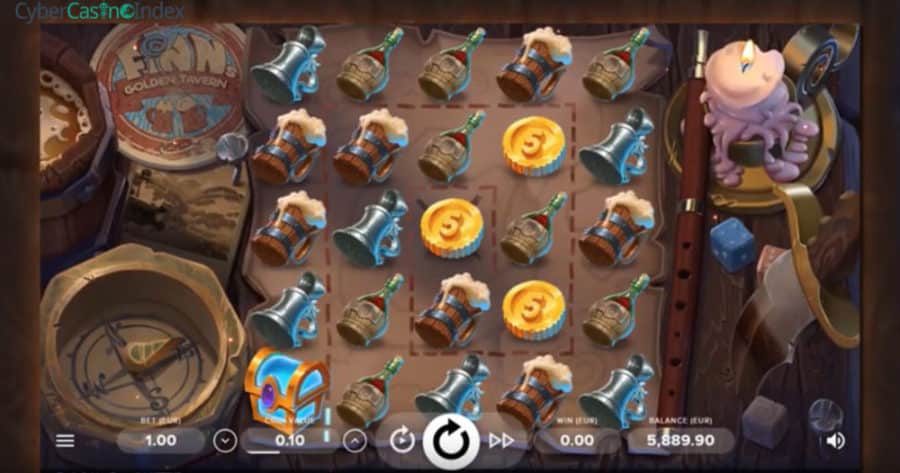