Beavis and Butt-head are back in the scene and will bring us great memories of the early nineties, where MTV was the main music channel that aired this unique sitcom. Mike Judge came up with a brilliant plot for the time when he created the mischievous and lazy characters of these two teenage characters. This animated adult sitcom came with a lot of criticism, especially since these youngsters where portrayed as pyromaniacs and other dangerous behavior tendencies. Nonetheless, Beavis and Butt-head continued to air for 8 consecutive seasons and was one of the favourite sitcom for the time for many teenagers.  These two couch potatoes, tries their best to avoid going to school and in all fairness one can see their level of intelligence as they are practically literate.  They obviously lack parental guidance and clearly show lack of empathy and morality even towards each other. One could say at this time an age that it’s an absurd sitcom, but for the early nineties, this was a bit of a shocking television series.

Enough said on the TV show, now it’s time to give you some input on this fantastic Blueprint Gaming video slot. Beavis and Butthead video slot is a 5 reel, 3 rows with 20 fixed paying lines video slot. During the main game the theme is set with the two stupid characters sitting on their butt in front of the TV, doing what they do best, wasting time and the reels of the slot displayed on their TV set. There are several game features that have been wisely crafted by Blueprint Gaming, including; Cornholio Wilds, So Nacho, Butt Flambé, Colossal Couch Fishing, Some Like it Hot and Die Fly, Die!

Beavis alter ego Cornholio will trigger full stacked wilds, while in the Colossal Couch Fishing, Butt-head will grab his fishing rod to catch a 3×3 colossal to generate a giant colossal symbol. There is also the funny feature “So Nacho” where Butthead tries to open a bag of nachos that explodes into mystery symbols that are randomly placed on the reels. The best is yet to come with the Butt Flambé feature, in which Beavis pours hot sauce and generate a flaming hot fart that can award the bonus feature. In Some Like it Hot feature, both idiots drink hot sauce that causes to burp hot flames that can award big winning spins! While watching their TV set, Beavis and Butt-head will smack their TV set with a fly swatter to trigger the Die Fly, Die feature that can turn the wilds in to different positions to make a winning combination! There is also 2 more features that can trigger at any time and after any spin. When the Sofa Slugfest feature is triggered some of the symbols will fall out of the reels and replaced by new ones, while the Change the Channel feature will change the channel to reveal a potential win.

Hold your horses because, more is yet to come so keep your suspence high and check out the 6 bonus features that can be triggered in Beavis and Butthead video slot when 3 or more scatters land on the reels:

Blueprint Gaming cleverly created this fantastic video slot and in my opinion it is one of the best video slot that I have reviewed this year! Blueprint released Beavis and Butthead video slot in May 2019 and I am really looking forward to spin the reels of this slot! Feel free to share your thoughts about this video slot by simply register an account and submit your comments.

You Must Be 18+ To Play Beavis and Butthead Slot For Fun!

Base Game Preview of Beavis and Butthead 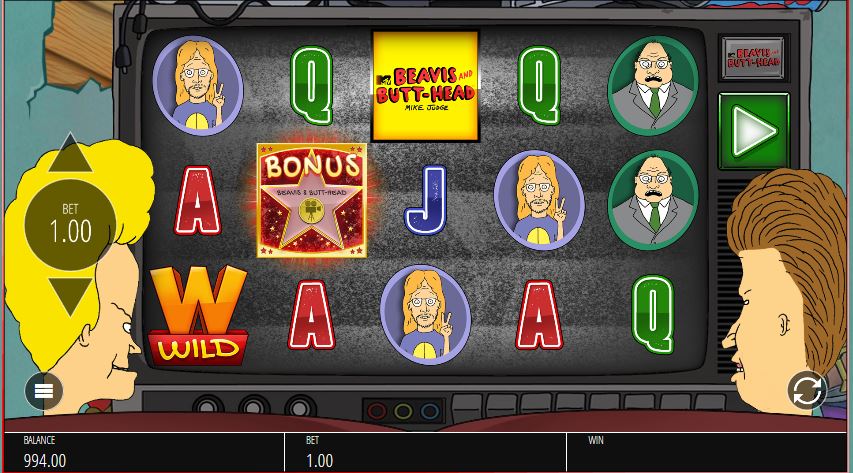