Play’n GO’s Coywolf Cash video slot puts the player straight into a North American tribal themed setting. The spectacular nature, wildlife and native american lore are well represented in this beautifully designed video slot. In addition to the stunning visual aspect of the game, Coywolf Cash is backed up by a music score that suits the theme perfectly. The term Coywolf derives from a hybrid breed of the Coyote and the Grey Wolf and is sometimes referred to as the Woyote. The Coywolf Cash video slot has 5 reels, 3 rows and 50 paylines. This video slot is a high volatility game and there are some great slot features such as the Prey Free Spins rounds and the Wild Reel feature. The maximum win is x4,000 and the RTP (Return To Player Percentage) is an astonishing 96.31%.

The symbols used in the Coywolf Cash video slot is themed around the North American wilderness in combination with native american tribal symbols such as Totem figures and wooden carvings of the 10, J, Q, K and A. The animal symbols you’ll see on the reels are foxes, bears, hawks, lynx and wolverines. The wild symbols is the standard Coywolf which substitutes all symbols except the wild and scatter symbols and the Alpha Coywolf which appear during the Wild Reel feature. The scatter symbols are the totem pole symbol of the Coywolf which will trigger the Prey Free Spin round if you hit 3 or more, and the wooden mask symbol that will activate the Wild Reel feature if it appears on the third reel.

The Wild Reel feature can be triggered in two ways which represent tier 1 and 2. The first tier of the Wild Reel feature is triggered by the Mask scatter hitting the third reel during the base base game. This will open the Horizontal Wild Reel on the top row of the reel. Up to four Coywolf wilds will the appear and stack the reels below.

The second tier of the Wild Reel is triggered during the Prey Spins feature if the Mask scatter appears in the Wild Reel. During the second Wild Reel tier the Coywolf wild symbols will appear with x2, x4 and x7 multipliers. The Totem scatter symbol will give +2 or +4 spins.

20 No Spins on Book of Dead

You Must Be 18+ To Play Coywolf Cash For Fun! 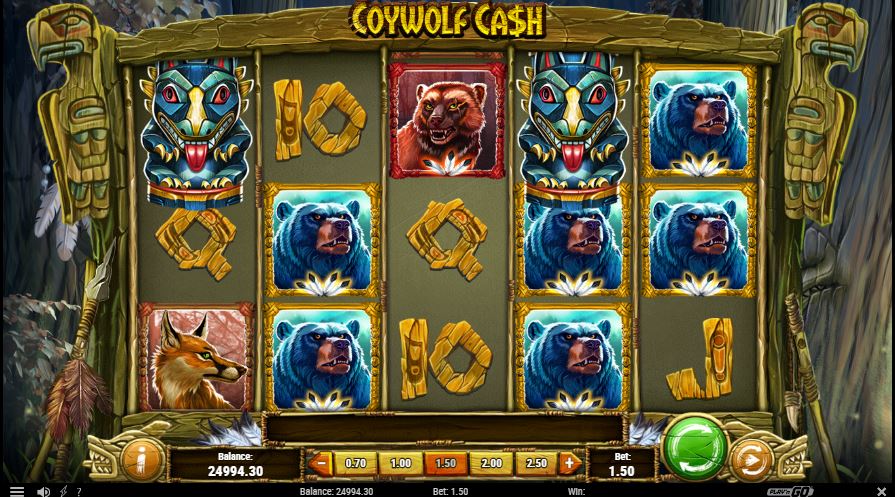