Hook’s Heroes™ is a 5 reel with 3 rows and 20 paying lines and offers a great experience with it’s feature freespins, features spins, wild substitutes and character features. There are 3 different spin features that triggers the freespins which are Fairy Feature, Mermaid Feature and the Pirate Feature. The maximum win per game round is higher than the coinciding win since this game has 3 different spin features that can trigger more game rounds so players can win more than €90,000 while playing with the default max bet! The return to player percentage which is after all theoretical is higher than the average slot and it’s set at 96.80%

Hook’s Heroes™  as  other recent Netent™ games will be available immediately on desktop and mobile. Check out all Casinos that offer Netent games here….

Recommended: Get 20 no deposit free spins on Book of Dead! 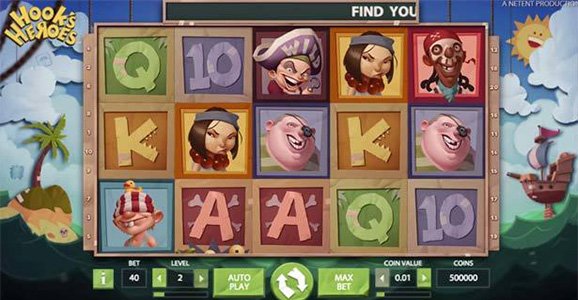