Yggdrasil Gaming has finally released their first Asian themed slot, in which the main character is of course the cat. In Japan Neko means cat, but also can be made as a reference for a female women dressed in a cat costume. Well Lucky Neko Gigablox™ symbols are all based on cute cat figures of different shapes. Yes, that’s right. One symbol can be as big as a 4×4 in base game and 6×6 during the free spin rounds.

One can say that Lucky Neko Gigablox™ video slot is definitely packed with many game features and as always a great overall design with that vivacious touch. The playing grid during base game is set to 6 reels, 4 rows with 40 fixed paying lines video slot. Note however that during the free spin rounds the playing grid expands to 6×8, which therefore increases the paying lines to 85 pay lines. There are 8 different symbols, of which 4 are high paying symbols and 4 low paying symbols. There is also the free spin symbol and the wild symbol which substitutes other symbols wit the exception of the fee spin symbol. One of the main feature of the game is the Gigablox™ in which a symbol can be as big as 4×4 in main game and 6×6 during free rounds. Such cluster symbols can increase the chance of getting more winning combinations. To get a winning combination 3 or more of the same symbol must fall on a winning line, from left to right.

To activate the free spins rounds of Lucky Neko Gigablox™ 5 or more free spin symbols must land on the playing grid. The player will get a free round for each symbol. Additional free rounds are added if more free spin symbols lands during the free spin rounds. On the right side of the playing grid, a blessed symbols will appear.  The blessed symbol will turn into one of the symbols and multiply any winnings by 5 times. So yes, there win also a win multiplier in this slot. During the free rounds a player can get a maximum win of 6,953 time the bet amount.

Lucky Neko Gigablox™ has been very well crafted by Yggdrasil Gaming. This Japanese themed slot can be very attractive to any player that has a soft spot for cats or asian themed games. There aren’t as many game features, but there is enough to make this video slot complete. The theoretical payout percentage is set to 96.40%, which is slightly higher than the average slot. The maximum coinciding win, or highest possible win combination is set to 6,953 x the stake amount, which is also quite high. I can say that this video slot might make quite a hit with slot players.

You Must Be 18+ To Play Lucky Neko Gigablox™ slot For Fun! 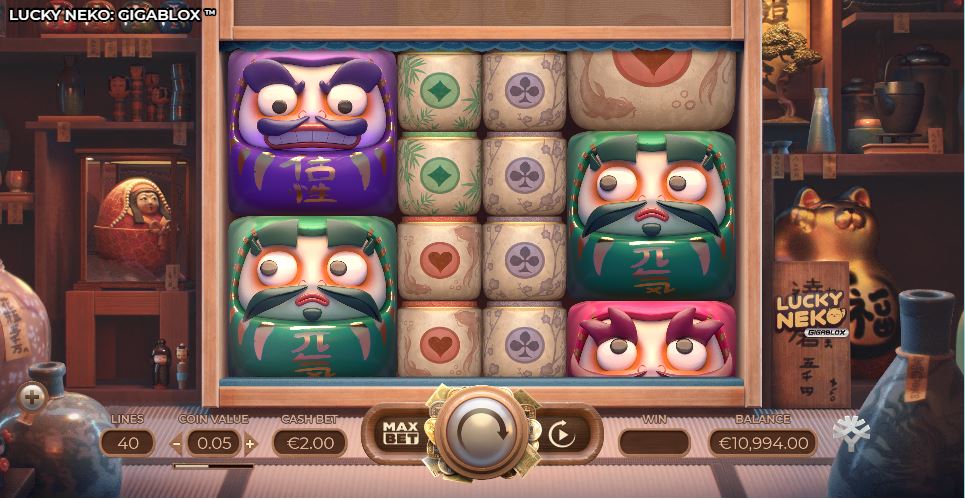 3.8/5
20 Free Spins on Book of Dead
This review was written by Marie Smith
This is Marie here! A slot and casino games enthusiast. I've played and reviewed various online casino games to offer our visitors the best insights on the most popular games - www.cybercasinoindex.com