Reel King Mega video slot was released by Red Tiger Gaming on the 9th of May 2019. This is a follow up of Reel King produced by Barcrest, which was a very popular slot machine stationed in several pubs across the UK. In 2014, Novomatic signed an agreement and took the next step to make this popular slot available online. Since then, Reel King has kept it’s popularity, especially among UK players, and we hope that Reel King Mega will be greeted with the same enthusiasm.

Reel King Mega is a 5 reel, 3 row, with 20 fixed paying lines video slot. The main feature in this video slot is the King’s Crown, which is triggered quite frequently during a session, swapping symbols into wilds and adding Super Symbols which is a 2×2 colossal symbol which can land in various areas across the reels.  The highest coins can be triggered when the Reel King feature is activated. The funny looking King will block the reels and spin the one line reel available on his tummy to generate a great win that goes up to 25 times your stake amount! The King will continue to spin the wheel until there is no winning combination.

If players are feeling lucky enough, they can use the gamble feature to get some extra cash on the winnings. The gamble feature is very simple and players can choose to risk as much as they want. The higher the payout the less chance is to get your winnings cashed out – As simple as that! Players can choose to bet from as little as 0.20 up to £$€200 and can generate a maximum coinciding win of 500 times the stake amount. Reel King Mega return to player also known as RTP is set to 96.00% and is considered as a low variance slot.

Reel King Mega video slot powered by Red Tiger Gaming has that classic look which in my opinion can catch the interest of many experienced players that are used to the old school slot machines. Let us know what you think about this video slot by simply register an account and submit your comments.

Recommended: 20 Bonus Spin on Book of Dead at Dunder Casino! 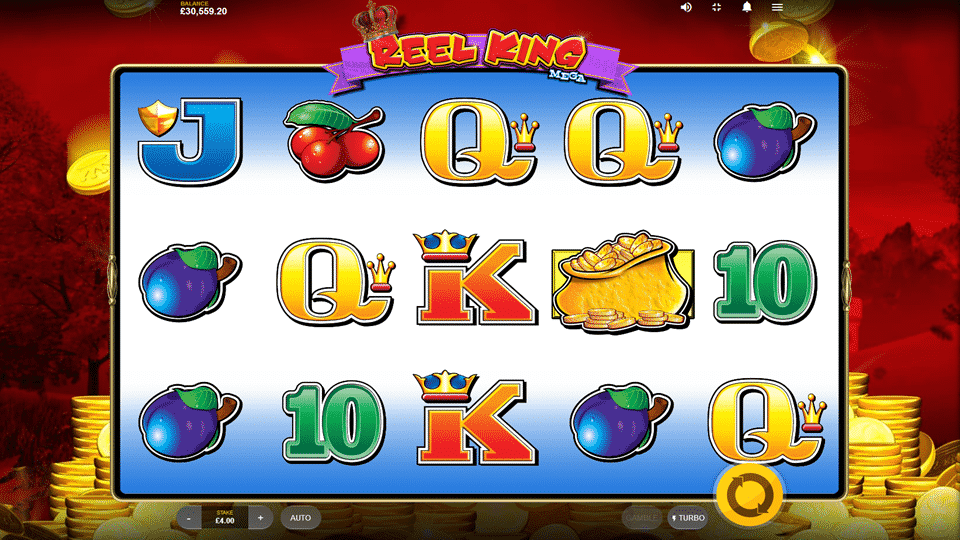