The youngsters these days might have all the games and the most advanced games consoles, but for those who grew up between the 80s and the 90s definitely remember the good old days where the most favourite gathering spot to meet friends would be at the arcade hall. I myself was amazed back then by the quality of Street fighter which was developed by Capcom and was made available in most arcade halls in 1987. I was more blown away with Street Fighter 2 The World Warrior which was released a few years after 1991. Capcom back then and till these day, produces a great selection of video games, but it is good to know that Street Fighter was one of the very first games that made their name shine bright, and with a reason. No one ever saw such a high quality video game at that time!

Netent has kept the classic graphics of the arcade game, including all the main characters and their super powers. At a first glance one can immediately be taken back to the old days, and hence the excitement hits in. This is a 5×5 playing grid video slot with the famous Cluster pays. To form a winning combination 4 or more matching symbols adjacent to each other. The symbols fall in an avalanche mode, and the symbols of the winning combinations are removed from the playing grid to make space for more symbols to fall. Players can choose to bet from as little as 0.20c/p up to a maximum bet of £$€700, which is one of the highest max bet we have ever seen on an online slot. High Rollers might find this game quite interesting, especially if they like to take high risks to get the highest possible rewards. There are 4 high paying symbols that can trigger up to 30x the bet amount. The victory symbols and the defeat symbols are the most lucrative ones and can drop in a 2×2 colossal symbols, which means it’s a guaranteed win.

Netent is well known to be crafty with online casino games especially when it come to game features. In my opinion, they have been the most innovative games provider within the industry.  So let’s dig deeper to see what Street Fighter 2 has to offer. Before initiating the game, the player will get to choose one of the 8 fighter. The game features will depend on the fighters available in the ring. Each fighter has a different  RTP and of course they can trigger different features. At the top of the playing grid, one can clearly see the classic KO and the life bar of each player. Here’s more details on the fighters:

When the selected fighter loses the battle, the Car Smash Bonus Game is activated. Same as the classic game, the fighter can take their anger by kicking and punching the car by using the old traditional Joystick. If the player manages to destroy the car, a random price between 5 to 15 times the stake amount will be awarded.

Thought Netent would run out of Free Spins? Well, there are some free spin rounds in store, even in Street Fighter 2 video slot. Free spin rounds are triggered when the chosen player wins the battle. There are 4 different levels of which has different win multiplier and a different boss to defeat.

If you lose you battle while fighting against a boss, you will get the chance to redeem yourself by using a portion of your winnings in the Insert Coin Gamble Feature. The risks are high but so are the rewards. In the gamble feature the player will get the advantage of an increased payout percentage. Yes that’s right! During the gamble feature the RTP will increase to 98.70% up to a 100%.

This video slot has definitely triggered some sweet childhood memories and I found myself very engaged with the game. There is a lot going on, but it is something that is expected especially since this video slot is based on an arcade game. The theoretical payout percentage is set between 96.02% to 96.08% which increases when using the gamble feature as described above. If you where a kid or a teenager in the 80s and the 90s, you will definitely get tempted to spin the reels of Street Fighter 2. 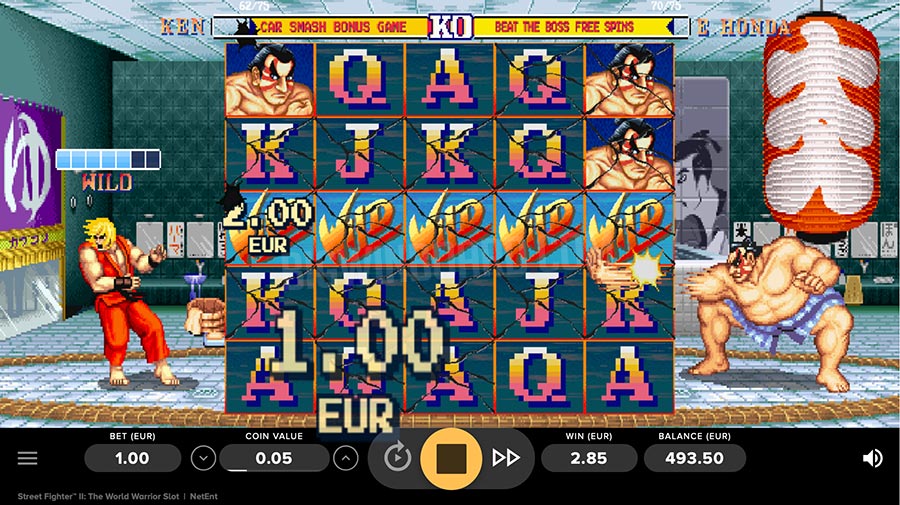 4.0/5
20 Free Spins on Book of Dead
This review was written by Marie Smith
This is Marie here! A slot and casino games enthusiast. I've played and reviewed various online casino games to offer our visitors the best insights on the most popular games - www.cybercasinoindex.com