Wilhelm Tell video slot is based on the swiss legend of a crossbow  expert marksman that was set to defeat and assassinate Albrecht Gessler an Austrian dictator who was oppressing the population. Set in the 14th century Wilhelm Tell video slot will take us to a journey of a battle between good versus evil. This legend has been published as a novel various times, most probably more known as William Tell in English speaking Countries. Those who read this story will surely remember the risk William Tell took when he shot an apple that was placed on top of the head of his son. I guess no one can argue the fact that he had a good aim.

Wilhelm Tell is a 5 reel, 3 row with 20 fixed betting lines video slot. There are only 7 paying symbols of which 3 o the highest paying symbols are represented by Wilhelm Tell’s characters. A winning line is formed when 3 or more symbols fall on a paying line from left to right. Players can choose to play from as little as 0.10c up to a maximum bet of €50 or equivalent.

No one can deny the fact that Yggdrasil Gaming slot are second to none when it comes to game features. They have been very creative when developing their slots and they have come up with some unique features that can be easily distinguished from other games providers. Lets start with the stacked wild symbol which is represented by Wilhelm Tell’s son and the famous 🍎 on his head. I don’t blame this poor boy to scared when chained to a tree waiting for an arrow to be shot a few centimeters over his head. Besides replacing all other symbols, the Stacked Wilds can Nudge to cover the whole reel, and therefore increase the chance of a winning combination.

The free spin rounds are activated when 3 more free spin symbols lands on anywhere on the reels. Once the free spin feature is activated, the player will get the chance to choose from 3 different modes.

Free Spin symbols are only available during base game, therefore free spin rounds cannot be re-triggered during free spin mode.

Since I’ve been reviewing slots, I must say I never came across one that was based on this legend, so no one can argue the creativity when selecting the theme of this video slot. I was quite taken away by this slot, because it is very simple and intuitive. We have seen a never ending number of winning lines on recent slots, so it is quite refreshing to see a classic 5×3 playing grid with a fixed set of possible ways to win. The theoretical payout percentage is set to 97.00%, which is quite high, when compared to other slots. In addition the maximum coinciding win is set to 7,520 times the bet amount. All in all I would recommend this slot for those players who want to get good thrill with a higher RTP.  Feel free to share your thoughts about this video slot by simply register an account and submit your comments.

Base Game Preview of Wilhelm Tell 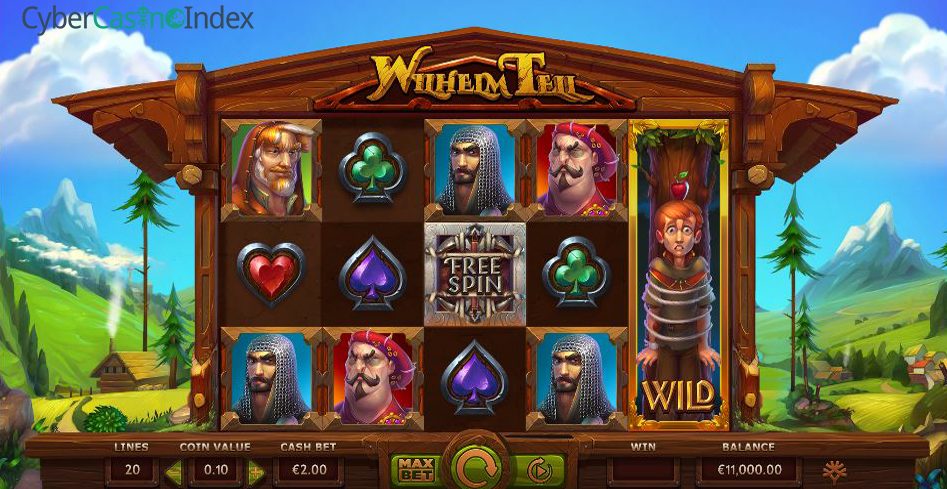 This slot review was published by Maria Smith – Slot Enthusiast at – CyberCasinoIndex.com