Warlords – Crystals of Power™ was  released by NetEnt on the 24th of November 2016. The theme is based on 3 warlords that fight against each other to rule the land to reap the riches. Warlords – Crystals of Power™ is a 5-reel, 3-row, 30 fixed betting lines video slot with payout percentage set to 96.89%. The game features include: Wild substitutions, Re-Spins, Free Spins, Stacked symbols, Scatter symbols and Random Features.

About Warlords Crystals of Powers Features

In Warlords you will get the excitement tripled, with 3 different Free Spins each corresponding to one of the 3 different types of Scatter symbols: The Priestess, The Barbarian and The Samurai. When 2 scatter symbols lands on the reels, a re-spins is triggered, which may give the player the chance to get another scatter symbol to trigger the free spin rounds. Each warlord has a different Free spin rounds, which adds great excitement to the game. Getting different Scatter symbols activates the Scatter battle between the three warlords, and the game begins. In Warlords – Crystals of Power™ players will be able to choose their warlord: The Barbarian, The Priestess or the Samurai.

The amount of free spins awarded depends mainly on which free spin rounds are triggered:

Warlords – Crystals of Power™ has a higher than average return to player percentage, which is set to 96.89%. The average online slot has an RTP set to 96.20%, anything higher than this is always very welcomed by online slot players. There is also the chance to win up to 100,000 coins in a single spin. Leave your comment and let us know what you think about this video slot release!

Payout on Warlords – Crystals of Power™

Preview of Warlords – Crystals of Power™ by NetEnt 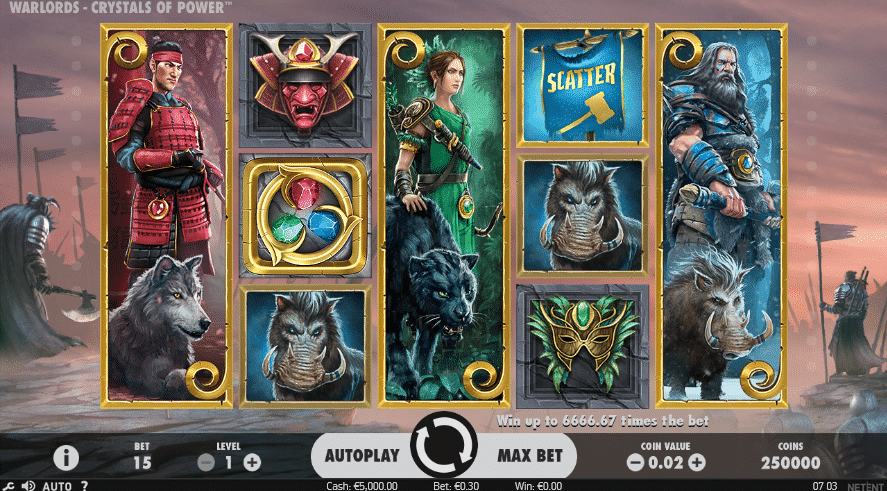 4.5/5
Netent Slot Reviews
This review was written by Marie Smith
This is Marie here! A slot and casino games enthusiast. I've played and reviewed various online casino games to offer our visitors the best insights on the most popular games - www.cybercasinoindex.com